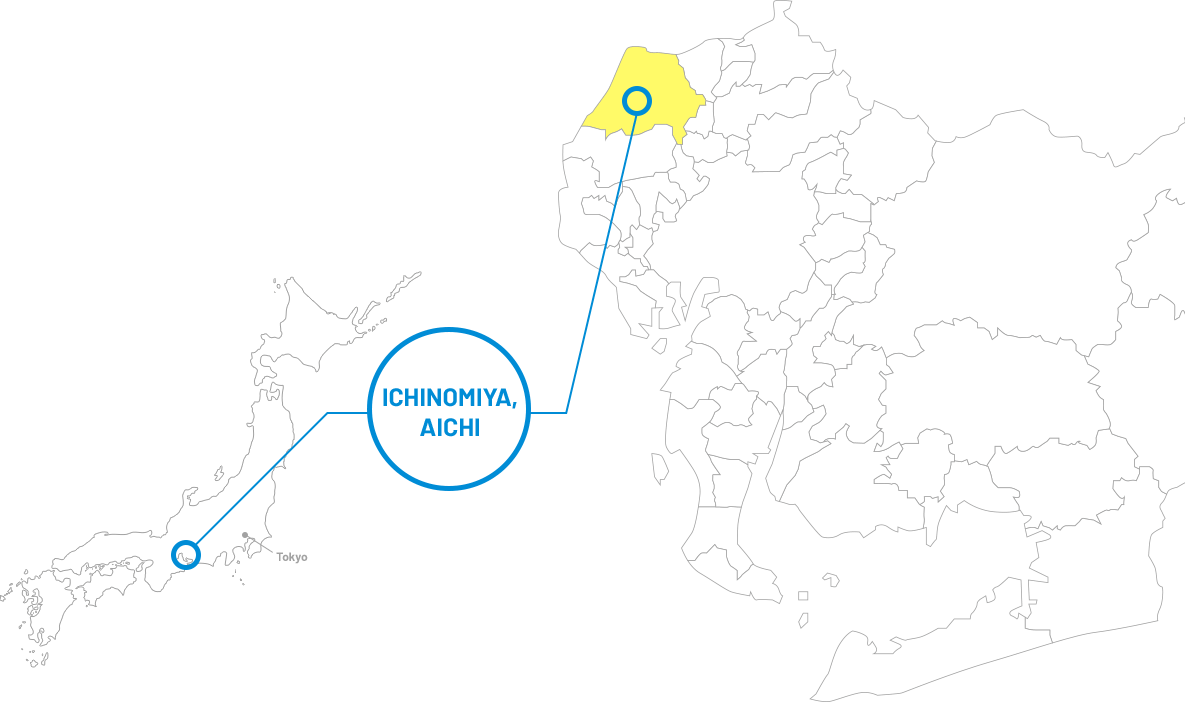 Scenes in the famous movie, The Seven Samurai, actually happened in Aichi Prefecture’s Ichinomiya. One of history’s most famous swordsmen trained here, and it is the birthplace of gallant samurai warriors. Ichinomiya is also home of the feudal Owari Province’s most important and historical shrines.

Each of Japan’s old provinces’ most important, most venerated Shinto shrines were known as the Ichinomiya. When the Kokushi, the provincial governors arrived in their lands, the first thing they would do would be to pay their respects to the deities at the Ichinomiya.

Masumida Shrine of Owari Province, the historical name for modern-day western Aichi Prefecture, was Owari’s "Ichinomiya", and the township that evolved around the Masumida became known as Ichinomiya.

The Warring States period samurai warrior and feudal lord, Yamauchi Kazutoyo was born in Ichinomiya. After the feudal period, Ichinomiya became famed for its woven wool textiles industries, and many of the old textiles factories with their iconic sawtooth styled rooves remain. Ichinomiya was where the Nagoya and Aichi Prefecture wide cultural practice of offering a special breakfast menu known as a “Morning” is said to have begun. Customers ordering a morning coffee are served with a thick piece of toast with butter, jam or even a sweet red bean paste, a hard-boiled egg and possibly even a salad or separate side dish, all for the price of the coffee. The locals, even businessmen from Tokyo and Osaka would take advantage of the regional hospitality.

Just 10 to 15 minutes by train from Nagoya City via the JR Lines Rapid, or Meitetsu Limited Express trains, Ichinomiya is a city to discover! 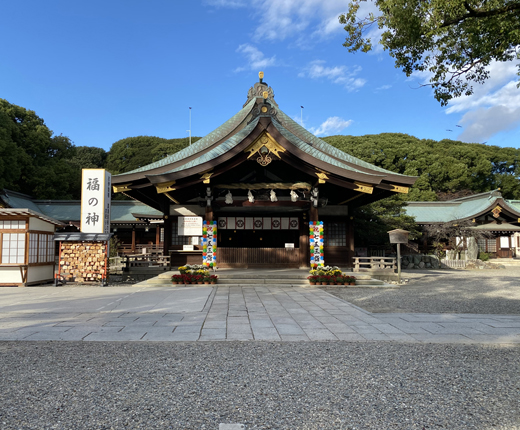 Patronized and worshiped by the samurai lords of Owari, Ichinomiya’s sacred Masumida Shrine is said to have been founded over 1,400 years ago, and was the Ichinomiya, the first, or principal shrine of Owari Province, dedicated to the god, Amenoho-no-Akari-no-Mikoto, an ancestor of the Sun Goddess, Amaterasu. As the provincial Ichinomiya, the Masumida Shrine gave the surrounding city, Ichinomiya its name.

Despite this quiet, historical image, during the year, the Masumida Shrine hosts lively martial arts events, religious festivals, even weddings. There is always something to see, experience and discover. The annual Peach Blossom Festival takes place in April, while the summer Tanabata Festival sees thousands of visitors dressed in colorful yukata, summer kimono making wishes and praying for happiness. The Autumn Festival is just as popular and offers many traditional stalls and festival entertainments. On New Year’s Eve and New Year’s Day, many thousands visit the sacred Masumida to make their first prayers at the much-revered, historical shrine.

Masumida Shrine’s many amulets for the protection for drivers, loved ones and children, even amulets for passing tests are considered particularly auspicious. Masumida is a center of spirituality and festivity, a place of worship, and celebration playing a major role in the past and present lives of the people of Ichinomiya.

Early in the movie “The Seven Samurai”, the hero, Shimada Kanbei rescues a child from a sword wielding maniac. Borrowing a monk’s cassock, he shaves his head and carrying two rice balls approaches the cabin where the child is being held. Disguised as a monk, he offers the rice balls to the kidnapper before overpowering the man and rescuing the child unharmed.

The story is based on the early 16th century samurai and founder of the Shinkage-Ryu school of swordsmanship, Kamiizumi Nobutsuna. Kamiizumi is said to have saved a child as portrayed in the movie while staying near Ichinomiya’s Myoko-ji Temple. The internationally acclaimed movie director Kurosawa Akira heard the story, and adapted it for his 1954 movie, The Seven Samurai. A stone monument and sign stands in front of the Myoko-ji in memory of Kamiizumi Nobutsuna having stayed there.

Kikusui, Last of the Hanaoka Establishments

Japan’s Taisho period (1912 -1926) was a time of unprecedented peace, prosperity, political and social change. Especially for Ichinomiya. The areas’ many industries, particularly woolen cloth manufacturing, were thriving. With such abundance came many entertainments. Ichinomiya’s "Hanaoka" area become a nationally recognized leading entertainment district with more than 100 establishments. While the Hanaoka district has since disappeared, one traditional restaurants, Kikusui, still remains, catering for small, intimate lunches and dinners to large groups. Founded about a century ago, Kikusui invites guests to enjoy traditional Japanese cuisine and on order, entertainments by true Geisha. Enjoy Japanese culture and cuisine at Ichinomiya’s Kikusui.

Bishu Ori has become a brand name for the quality woolen woven textiles produced in the Ichinomiya area. Bishu is the area’s old name, and Ori means woven. Ichinomiya remains one of Japan's, and in fact the world’s, leading textile production centers, and the popular Bishu Ori cloth, favored by many leading overseas luxury brands, continues to be in high demand. Many of the old sawtooth roofed factories where the reputed textiles were once made have undergone a renaissance, and are being preserved as part of the local scenery, reminders of the area’s prosperity, becoming galleries, display rooms and cafes.

Central Japan has a unique Japanese coffee culture known as a “Morning Service”.
Basically, for the price of a cup of coffee, you are also served with a thick slice of toast, often a hard-boiled egg, and depending on the café, peanuts, salad, yogurt possibly even sausages and bacon. This “Morning Service” culture started in Ichinomiya in the 1950’s, catering to the textile factory shift workers who started their day at various times, and management and customers who would visit the quiet cafés for meetings. The cafés became popular with the customers and flourished, prompting other cafés across the area to imitate the services. Ichinomiya's "Morning" is not only great value service for customers, but also a part of the local lifestyle.

Ichinomiya’s Tanabata Festival, One of the Big Three

The mother of Ichinomiya's guardian deity, Masumida Shrine's Amenoho-no-Akari-no-Mikoto, is the god of textiles. It is said that Ichinomiya's textile industry developed with her blessing. The Tanabata Festival is also closely related to textiles.

The Tanabata story involves Tentei the Sky God’s daughter, Orihime, the Weaving Princess, and her beloved Hikoboshi, the Star Herder. Having fallen in love, Orihime neglected her weaving duties, and Hikoboshi allowed his cows to stray across the heavens. Angered, Tentei forbade them to meet, separating them by the Milky Way. Moved by his daughters’ tears, Tentei allowed the lovers, represented by the stars Vega and Altair, to meet once a year, on the seventh day of the seventh month, when the stars seem to meet in the night sky. For these reasons, Tanabata is well celebrated in Ichinomiya.

The famed 16th century samurai, Yamauchi Kazutoyo (1545 – 1605) was born in Ichinomiya. Kazutoyo first served the warlord Oda Nobunaga, and participated in the battles of Anegawa (1570) and Nagashino (1575), before becoming a retainer of Toyotomi Hideyoshi. He worked his way up from being a samurai with little talent, to being the lord of entire provinces thanks to his wise and beautiful wife, Chiyo, whose advice, encouragement and purchase of a splendid horse brought her husband to the attention of his liege lord. Kazutoyo helped capture Gifu Castle and led 2,000 men into battle at Sekigahara in 1600 for the Tokugawa cause, for which he was later rewarded with Tosa Domain (now Kochi Prefecture) where he built Kochi Castle.

In celebration of Ichinomiya’s hero, an annual parade and festival are held in his honor at his birthplace, Kuroda Castle, now the Kuroda Elementary School. The main attraction is the Sengoku Period Parade featuring a mounted, armored Kazutoyo and his wife, Chiyo, surrounded by ladies-in-waiting and armed samurai.

Also, every August 14, the huge Nobi Fireworks show hosted by Ichinomiya and neighboring Hashima cities takes place along both banks of the Kiso River. Special Makiwara Boat festival float lanterns flicker beautifully on the Kiso River, and thousands of colorful fireworks illuminate the night sky, creating a tournament of light and sound with some of Japan’s biggest single fireworks used in this exciting summer spectacular.